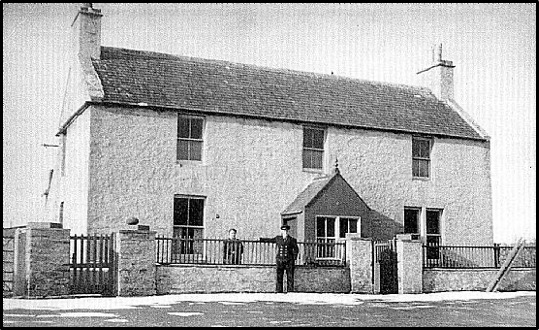 Harbour House has been the symbolic heart of Kettletoft and the wider island for over 100 years from when it was built in the late 1800s until the ferry relocated to Loth in the early 1990s. The house stands proud over what was the island’s most important transport hub providing vital passenger and freight connections with the mainland. The Harbour is what made Kettletoft the beating heart of the island and was literally taken away in a heartbeat when ferry services moved to the south of the island.

Kettletoft is still an important part of the island as it is home to the island’s two pubs and recently the newly renovated Craft Hub, but it is still a shadow of its former self. While it will take time there are plans to renovate and repurpose many of the buildings that now stand empty and to give Kettletoft a new lease of life. You can read more about the overall plans for Kettletoft at www.sandaydt.org/kettletoft

Harbour House itself dates back to the late 1800s and was built sometime between 1881 (surveyed 1879) when it did not show up on the map and 1903 (surveyed 1900) when it did. We do not know the date of the photo above but believe it to show Harbour Master John Skea.

Sanday Development Trust took Harbour House into community ownership on 23rd March 2017 and began the plans for its redevelopment into a 3-bedroom family home to address multiple needs, including the regeneration of Kettletoft, modernising old housing stock and attracting new families and skills to the island. The project has been challenging for a number of unrelated reasons and has taken far longer than any of us could have hoped, however, the result has been worth it. Harbour House has been finished to a high standard and together with its harbour views makes it an enviable property. Your can take a virtual tour below.

Move around a picture by clicking on your mouse and dragging around, or by using your fingers on a mobile device.

You can also zoom in and out using your mouse scroll function, the pinch to zoom feature on a mobile device, or by using the + and – symbols in the top left of the picture.

For the full experience make the tour full screen by clicking on the box symbol in the top left corner of the picture, click it again to exit full screen.

Take a tour through time to see the progress as renovations took place.