The ‘weather’ and ‘climate’ are often used to mean the same thing but are actually very different and by mixing them together it is easy to overlook the story they tell.

Weather is the short-term weather that we experience day to day. Take a look outside your window right now and if it is raining, windy, dry or sunny, that is the weather. Climate on the other hand is what Is happening long term, think decades rather than months or years. 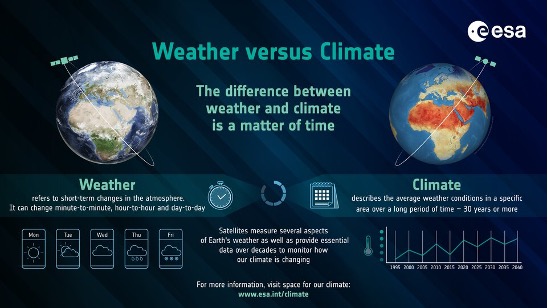 So weather is the right now and climate is the trend, take a look at the diagram above (© esa www.esa.int/climate Comparing the weather tells us very little about global warming and ‘climate change’. That is why it is very misleading to try and compare the weather now with what we have had in the past. It is easy to say ‘What is all the fuss about? Sure, we are experiencing a heat wave right now, but I remember the summer of 1976. Relax, stop complaining and enjoy the sun’.

That is why it is more important to look at what the climate is doing rather than the weather.

The weather will always vary and there will be the hot year, the year it didn’t rain for months, and the year the airport road flooded. On their own it is not too much to be worried about unless they are happening more often, getting more extreme or

happening in places they didn’t before (they are)

That is what the climate tells us. So, when the climate shows that temperatures are rising, even if it is by a degree or two it is a worrying sign.

Our planet usually does a great job of looking after itself and not everything that happens can be blamed on humans. However, it is also a fragile eco-system and there is only so much it can handle.

Millions and Billions are so easily thrown around these days that it can be easy to forget how different the numbers are. So lets put them into a context that is easy to imagine. 1 Million seconds is 12 days, 1 Billion seconds is 31 YEARS. Just think about that. And if you want to get really crazy (considering we have just seen our first companies valued at 1 Trillion dollars), 1 Trillion seconds is over 31,000 years.

Hopefully it is now a lot easier to appreciate that our planet does not have a chance to continue repairing the damage us humans are doing to it and why we must change our ways. It is simply not sustainable, we need sustainable times.